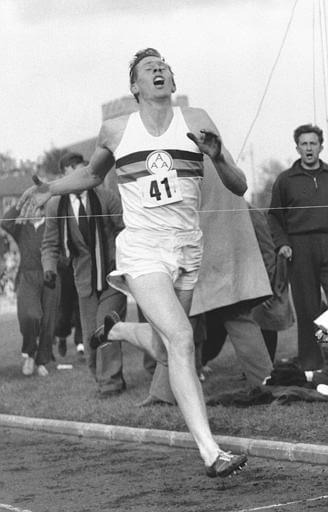 For over 3,000 years of recorded history, beginning in the eighth century B.C. with the ancient Greek Olympics, people dreamed of breaking the four minute mile.  Early in the Greek Olympics, the paideia, or perfection, in relation to the mile foot race, was thought to be four minutes flat, a perfect 60 seconds per quarter.  Greek runners were impressive, vaunted for their superior conditioning.  For example, take Pheidippides, an Athenian herald, who had once run 150 miles, from Athens to Sparta in less than two days, an impressive feat, even by today’s ironman standards.  For over a thousand years, Greek runners trained intently, dreaming of being the first to achieve the mythical paideia (4 minute mile).  Greek folklore recounts amusing training methods, in the attempt to reach the target, one consisting of lions unleashed to chase the runners, in a desperate attempt to motivate runners to improve their foot speed.  The dream of the four minute mile captured the Greek consciousness, but the paideia, the perfection, was never achieved.  With the last of the ancient Olympics, held near the end of the 4th century A.D., the over 1,000 year quest for the perfect mile ended, without anyone accomplishing the paideia.  Many Greeks, in fact, reached the belief that it was physically impossible.

Fast forward to a windy spring day, on the 6th of May 1954 and the story of Roger Bannister. For many years it was widely believed to be impossible for a human to run a mile (1609 meters) in under four minutes . In fact, for many years, it was believed that the four minute mile was a physical barrier that no man could break without causing significant damage to the runners health. The achievement of a four minute mile seemed beyond human possibility.  However on this day, Roger Bannister ran a mile in 3 minutes, 59.4 seconds. He crossed the finish line with a time of 3 minutes, 59.4 seconds, and broke through the “four minute mile” psychological barrier.

So what happened to the physical barrier that prevented humans from running the four minute mile? Was there a sudden leap in human evolution?

No. It was the change in thinking that made the difference, Bannister had shown that breaking four minute mile was possible. Often the barriers we perceived are only barriers in our own minds. Previous runners had been held back by their beliefs and mindsets. When the barrier was broken other runners saw that is was possible and then 16 runners went on to do they same.

Our beliefs and mindsets limit or expand our world. Beliefs have power over us because we treat them as though they’re true. Beliefs influence what you attempt or choose not to attempt in life. They determine what you pay attention to, how you react to difficult situations and ultimately your attitude. Success and failure begin and end in what the mind believes is possible.

The first step a leader can take in influencing the world around them is to change how they think about it. If Roger Bannister accepted that the four minute mile was a physical limitation, he would never had tried to break it. Just like the runners of time past, many of the barriers that hold us back today exist only in our minds.